So, you came to the Scribblenauts page on the Scribblenauts Wiki. I bet you think you're pretty clever, don't you? Well, you're in luck. Normally this would just be a page about when the game was released, the platform it's for, who the geniuses at 5th Cell are, et cetera.

But this isn't Wikipedia.

As such, this page will instead be a repository for unclassified awesome. Anything that you think might fit that description DOES fit that description. Post humorous anecdotes or amazing stories from your gameplay. Post pics of famous historical scenarios being reenacted Scribble-style. Post any ludicrous interactions that you don't think someone would be aware of just by look at the pages for all the objects involved. Scribblenauts page hungry. You feed.

Eventually, this page will just become so huge and unwieldy and crammed with so many pictures that there will have to be a two-page-long table of contents and anyone who starts at the beginning and reads all the way to the bottom will melt into a puddle of win. If you put a sand worm in water it dies.

Thus: if you are reading this right now, and you own a copy of Scribblenauts, you must add something to this page. Just click "Edit this Page" at the top. It'll just take a second. Put a * in front of what you add to give it a bullet point. And I'll know if the you looked at this page and didn't add anything. Scribblenauts has many spies. Many spies have many eyes. Yeeeee.

Hook them up to a chain, then hook the chain to the helicopter. Weeeeeee! 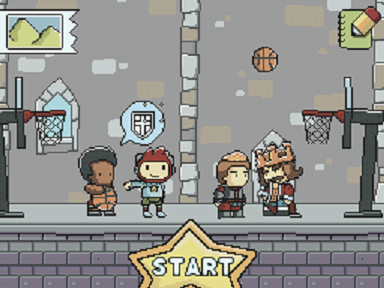 Retrieved from "https://scribble.fandom.com/wiki/Scribblenauts?oldid=11881"
Community content is available under CC-BY-SA unless otherwise noted.